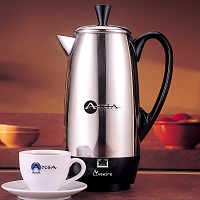 Equipped with a 100Base-T Ethernet port, iJoe attaches to any convenient network switch and makes rich, full-bodied gourmet coffee using a superconducting element for thermal efficiency, and borosilicate carafe to ensure not a drop is spilled. Once the java’s ready, an internal particle-beam scanner analyzes the fresh brew at a molecular level and digitizes it using a nano-wave Gigawatt laser originally developed for the “Star Wars” SDI missile defense program, then routing it at wire-speed to the requesting JoeStation.

“Music, video, coffee – it’s all just data,” says Axia marketing manager Clark Novak. “And data can be sent anywhere via Ethernet. iJoe is really the next logical extension of the studio network. It’s world-class initiatives like this that are helping us achieve new synergies.”

Adds Novak, “iJoe is really the first in a new line of Axia products. We are leveraging our brand value into synergistic partnerships to create shareholder monetization while simultaneously expanding our second tier solutions and refining our targeted knowledge base, which of course, will absolutely perhaps have a strategic impact on the investment paradigm and market capitulation.”

Companion software called JoePC will allow users to customize their cuppa, adding flavorings or lighteners to the mix after brewing for instantaneous customization. Total brew-to-cup latency is measured at less than 4 picoseconds, thanks to use of the latest AGC (Advanced Grinding Compression) algorithms.

Already, beta testers are raving about iJoe. “My airstaff runs on coffee,” says “Smokin’ Joe” Jackson, Program Director of ClearStar’s KissPig 100.4 in Okeefenokee, Florida. “Now, the jocks never have to leave the studio to get it – it’s delivered right to the control room, with virtually no latency. iJoe is helping us put more energy in our programming! Personally, I’m a fan of the ‘eSpresso’ setting – it keeps me alert during the day. Hey look, a squirrel!”

iJoe will be available in Summer of 2017. A list price will be released after pending discounts and rebates from the newly-formed US Department of Untaxed Mug Beverages (DUMB) have been factored in. A companion piece, the iJohn, is already in development, which will make it unnecessary for air talent to leave the booth – ever – according to company spokesunits.