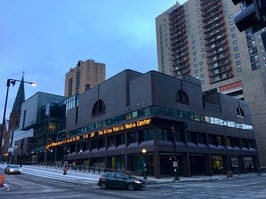 Years ago, Minnesota Public Radio was one of the first Axia customers, outfitting its entire facility with Axia Element consoles. The Element consoles have seen the facility through the years. Now, more than a decade later, MPR is undergoing a studio-wide console upgrade. MPR's Chief Engineer Bill Dahlstrom and Director of Engineering and Facilities Tom Nelson chose Axia Fusion consoles to replace the Element consoles throughout, touting performance and the benefits of being a part of the expansive Livewire ecosystem:

"Essentially we are one of the earliest adopters of Axia. Our Axia Elements were more than 10 years old and had served us well. We were so impressed by Element and it gave us such good service that we decided to replace them with more Axia," says Dahlstrom. "Being part of the Livewire ecosystem also certainly simplifies things. It cuts costs because we are not interfacing physical outputs on devices. We favor products from other manufacturers that are a part of the Livewire ecosphere."

With AoIP, you can upgrade gradually, over time, which is what MPR did, starting with the main, most-used studios more than a year ago, with the final studios' upgrade to be complete in the next few months.

About The Telos Alliance®

For three decades, the brands of the Telos Alliance have revolutionized radio and television by pioneering disruptive, cutting-edge audio technology with the goal of helping global networks and local stations produce better programming, improve audience engagement, and bolster ratings. The Telos Alliance is made up of six brands—Telos® Systems, Omnia® Audio, Axia® Audio, Linear Acoustic®, 25-Seven® Systems, and Minnetonka™ Audio—that raise the bar for quality and innovation in the radio and television industries. The Telos Alliance invented Audio over IP for broadcast and contributed time and resources to the effort that led to the AES67 standard. Headquartered in Cleveland, Ohio, USA, with additional offices and dealers around the world, the Telos Alliance offers an industry-leading warranty and backs users' critical on-air needs with worldwide 24/7 round-the-clock support for all customers. A complete list of dealers can be found at TelosAlliance.com/Dealers.