New Products to the Asia-Pacific Market at BroadcastAsia 2017

The Telos Alliance®—innovator in broadcast radio and TV technology and parent company to Telos®, Omnia®, Axia®, 25-Seven®, Linear Acoustic®, and Minnetonka™—announced today that it will introduce several new products to the Asia-Pacific Market at BroadcastAsia2017, May 23-25 in Singapore, including new products from Telos, Omnia, Axia, and Linear Acoustic.

"Across all Telos Alliance brands, we are committed to providing solutions like Livewire+ AES67 that meet the unique needs of broadcasters in the Asia-Pacific region, a very important market for us," says Ken Skok, Director of Radio Sales, Asia Pacific and Russia. "We look forward to demonstrating the products introduced to this market for the first time at BroadcastAsia in person, as we continue to lead the industry in AoIP."

Omnia celebrates its 20th Anniversary this year. And with the award-winning Omnia VOLT™ Broadcast Audio Processor, the brand has rewritten the rules for broadcast DSP once again, fine-tuning its algorithms and giving broadcasters more sonic performance and processing power in one rack unit than others offer in three. Sharing technological lineage with top-of-the-line Omnia products like the Omnia.11, VOLT features 1RU sound that rivals the best processors on the market. It has a next-gen clipper designed by Frank Foti and dynamics design from Omnia Chief Algorithm Designer, Cornelius Gould, along with a slew of new features that create impeccable audio from only one rack unit. These include six separate AGC sections (one wide-band, five multiband); five time-aligned limiter sections; deep bass, warmth, and stereo enhancers; and the best factory presets available.

VOLT's new QuickTweak™ system distills years of processing knowledge and proven approaches from Omnia processing pros into a simple set of controls that can turn anyone into an expert. Users can nail their signature sound in minutes whether using Omnia's advanced presets or their own settings, right from the VOLT’s front panel or a PC.

VOLT is also versatile. It uses DSP|Core firmware that allows broadcasters to alter the functionality of VOLT to fit their changing needs and applications, whether it's FM, AM, HD/DRM, or Studio processing. VOLT can even be used as a standalone stereo generator. All of this functionality is underscored by a fresh new industrial design that signifies a major leap forward in sonic performance.

Axia Pathfinder Core PRO offers reliable system-wide routing control that is independent of a PC. Axia has taken everything it learned over the last 10 years since it launched the Pathfinder family of routing control software and ported that knowledge into a completely new appliance, designed from the ground up to provide pro-grade routing that gives users easier, more intuitive control over audio workflows. Pathfinder Core PRO's intuitive web interface means simple configuration and monitoring from any device. This Linux-based appliance makes efficient use of the processor, while freeing users from a Windows-based server. Control protocol for third-party integration is also included: Pathfinder Core PRO Device Emulators allow it to “look like” another protocol, emulating third-party protocols and translating them into the Axia language.

The one-of-a-kind Axia IP-Tablet virtualizes the monitoring and control of Telos Alliance gear on conveniently mounted touchscreens of the broadcaster's choice. This not only saves space and streamlines studio design, but adds value to Axia consoles by putting those most-used functions—normally accessed via a monitor—right at the broadcaster's fingertips.

The Axia PowerStation and StudioEngine IP-Tablet licenses unlock control of connected Axia consoles. Users can choose from one of the predesigned templates, or through the simple drag-and-drop design interface, they can design a layout that is specific to their needs containing features like VU Meters, Timers, Time and Date Display, Status of On-Air, Preview and Talkback, the ability to change fader sources and console profiles, full control of onboard virtual mixing with faders, and more.

The Axia xNodes license allows IP-Tablet users to access the internal mixer inside the xNode, changing sources and routes and controlling the levels of each with virtual faders. When you combine IP-Tablet with an xNode you get a fully customizable mini mixer!

IP-Tablet licenses are also available for Omnia.9 and Omnia VOCO 8; Telos VX and VX Prime phone systems; Telos Z/IP ONE, and Axia Pathfinder. There’s even a Metadata Tools license that pulls metadata from the automation system to display on the tablet screen, great for consolidating critical info into a central location for board operators and on-air talent.

Broadcasters can mount the IP-Tablet either in the console itself with the IP-Tablet Fusion Mount (which occupies four console slots) or use the tablet externally, giving them control from across the desk or across the room.

Axia has been implementing AES67 compliance across the Telos Alliance product line since the AES67 standard was ratified. With v2.0, Axia is excited to announce that its IP-Audio Driver is now fully AES67-compliant. The Axia Livewire+ AES67 IP-Audio Driver lets customers send and record single or multiple channels of stereo PC audio directly to and from Axia networks via Ethernet—no sound cards needed. Up to 24 channels of stereo audio can be sent simultaneously over a single CAT-5 Ethernet connection. v2.10 adds AES67 features like the ability to sync to PTP, support to define multicast addresses outside of the Livewire range, and SIP/unicast support for RTP streaming. 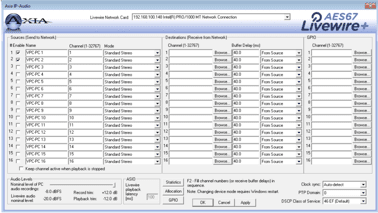 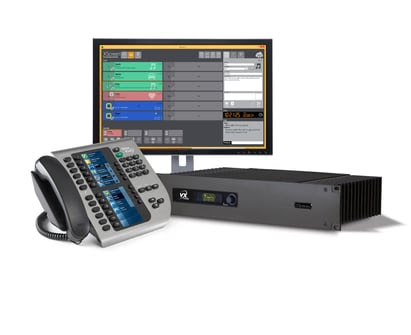