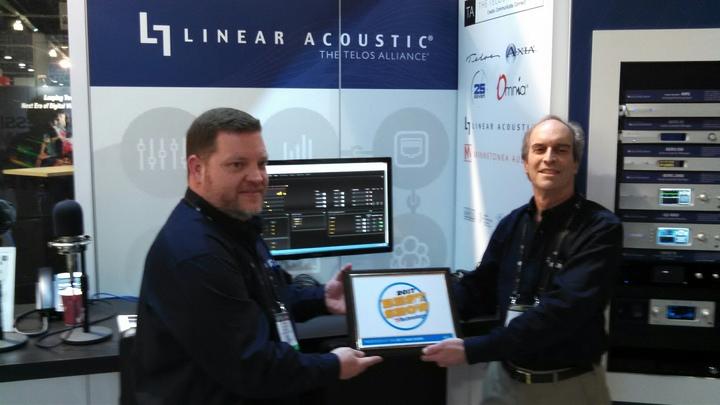 “We’re honored to be recognized by NewBay Media with a Best of Show Award for our Linear Acoustic AMS,” saidJohn Schur, President, The Telos Alliance TV Solutions Group . “We created AMS to deliver the full vision of an advanced consumer audio experience for digital television.”

The Linear Acoustic AMS offers a web interface, which controls the interactive features of MPEG-H offered to the viewer. The web interface allows viewers to build presets for different listening experiences, enabling viewers to personalize their sound experience for optimal playback on any platform, from mobile devices to immersive home theaters.

NewBay Media’s Best of Show Awards are evaluated by a panel of engineers and industry experts, and are selected based on innovation, feature set, cost efficiency and performance in serving the industry.

For three decades, the brands of the Telos Alliance have revolutionized radio and television by pioneering disruptive, cutting-edge audio technology with the goal of helping global networks and local stations produce better programming, improve audience engagement, and bolster ratings. The Telos Alliance is made up of six brands—Telos® Systems, Omnia® Audio, Axia® Audio, Linear Acoustic®, 25-Seven® Systems, and Minnetonka™ Audio—that raise the bar for quality and innovation in the radio and television industries. The Telos Alliance invented Audio over IP for broadcast and contributed time and resources to the effort that led to the AES67 standard. Headquartered in Cleveland, Ohio, USA, with additional offices and dealers around the world, the Telos Alliance offers an industry-leading five-year warranty, and backs users' critical on-air needs with worldwide 24/7 round-the-clock support for all customers.