The Telos Alliance® —parent company of 25-Seven®, makers of the Voltair® Watermark Monitor and Processor—announced today the availability of Voltair Data Export Licenses to help broadcasters obtain a comprehensive minute-by-minute understanding of exactly which programming is not encoding well in PPM®. Voltair will be on display at NAB 2016 at the Las Vegas Convention Center in the Telos Alliance Booth #N1934, April 18-21, 2016.

"Broadcasters know that not all programming encodes equally well in PPM®, and some content encodes downright badly," says Geoff Steadman, founder and president of 25-Seven. "While the Voltair unit itself provides a visual display that indicates when content is or isn't being encoded well, the data that Voltair constantly collects gives a more granular analysis."

Voltair keeps a minute-by-minute history of confidence metrics, both for original and enhancement levels. The Data Export License allows users to export that confidence-level data in a color-coded (green, yellow, orange) Excel spreadsheet for each broadcast day. Programmers can use this feature to identify the voices, commercials, and songs that don’t encode well for each minute of programming. 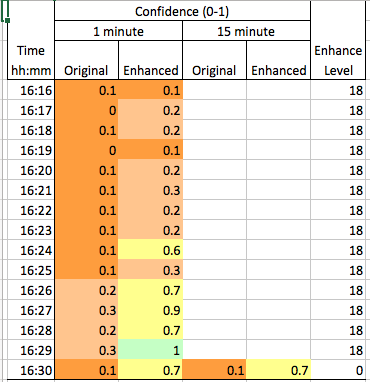 Above is an example of a Voltair Data Export spreadsheet. The orange and light-orange shades indicate periods when content showed low encoding confidence levels on Voltair.

For more information on the utility of Voltair's Data Export License feature, see Geoff Steadman's blog,"Using Voltair to Maximize Your PPM® Encoding" and "Voltair Still Gives You a Ratings Advantage."

Voltair users can also  follow this link to get a free data export license for a limited time.

Voltair and 25-Seven are trademarks of TLS Corp. All other trademarks are the property of their respective holders.